Even More Supplement Options At Our Retail Location: Contact Us At (707) 528-HERB

Isabella grew up in East Oakland where urban life surrounded her, yet she often sought out the natural spaces that had been left untended and were magically wild and raw. Her mother also grew a small, but luscious and memorable garden in their humble backyard; which became a foundation for how she relates to food, nourishment, medicine, and connection.

Isabella continued her urban journey to Los Angeles after high school, and after three years of living in Southern California heard the call to explore the wide open spaces of nature. Pausing her college education, she spent the next several years living and traveling throughout Colorado, Utah, and Arizona - each environment showing her new ecosystems, plants, cultures, and ways of being. Through learning and living more in tune with nature, Isabella discovered the ways in which the natural world can inspire and evoke creativity, connection, intuition, healing, and quality of life.

She returned to school where she finished her degree, a BA in Communication and an emphasis in Ecological and Educational Gardening, at the University of California, Davis. While at Davis she interned on the Student Farm where she led children Pre-K through 8th grade through garden explorations and stewardship as a form of experiential learning. She also tended to the medicinal and culinary herbs as well as taught several introduction to medicine making classes to her community on the farm. After Davis, Isabella completed two years of training at California School of Herbal Studies where she also apprenticed in the garden during that time. Currently, she is working at CSHS as the Director's Assistant and as the school's Medicine Maker. She also works as an Herbalist at Farmacopia and their Merchandiser. In her free time, she continues to study both the magical and scientific world of herbs.

Join Our Newsletter & Receive 10% OFF Your Next Purchase!

I was recommended to take magnesium for a few reasons by my doctor, and this brand has always been my go-to. I love that it's the highly absorbable "glycinate" form, and it's great that Farmacopia sells it in big bottles.

A
Summer Inflammation Soother Guide A.
I can see my eyelids again!

I've done the anti-inflammatory diet in this guide before. 2 summers ago. I loved it and stayed on it for quite a while. After this craziness of the past three months, I decided that I should try it again, but this time to do it exactly as the schedule dictates. O.M.G. All of my puffiness went away and I fit in my clothes again (some are even loose!). And now I love smoothies.

I have used the In The Moment Tincture for some time. But adding this beautiful altar cloth to actually being in the moment, brings a whole deeper meaning to looking within ourselves to recognize how we are a part of the problem as well as the solution to the painful reality of oppression, entitlment, and turning a blind eye to the injustices of others that we are waking up to. I am grateful to be able to participate in donating to Black Lives Matter and the Southern Poverty Law Center with this purchase. Thank you to all who created this limited edition that I will long treasure and use in my ceremonies. I recently did a ceremony to celebrate the creation of peace pocket tektites which was held by this beautiful altar cloth. 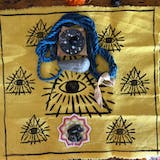 S
In the Moment S.
Gentle yet Effective

I use one dropper of this fine tasting tincture when I am overloaded with negative self-talk and it saves my sanity.
The ingredients are beautifully combined to be gently but effective as a mild nervine.